The solution to slippage during construction of pile drilling machine

During the construction of a pile drill, slipping and skipping is a common problem. The main performance is that the depth of the footage displayed by the meter does not change with the change of the stroke of the power head of the rig. Whenever such problems occur during construction, if appropriate measures are not taken, it often takes a long time to resolve them. 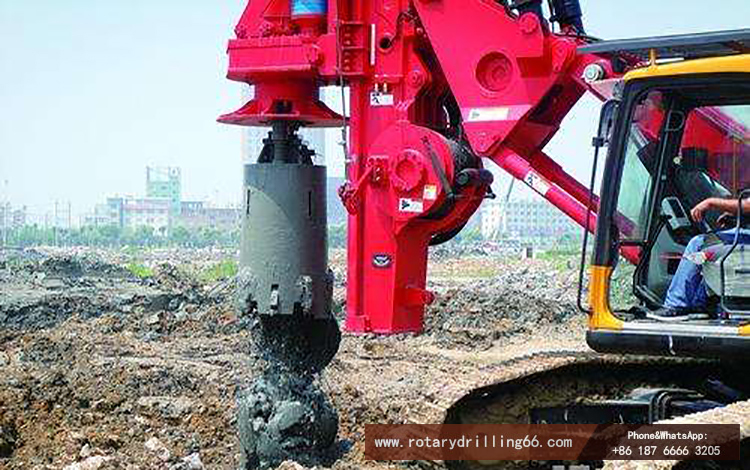 Formations where skidding occurs generally have greater strength and often require a certain amount of pressure to drill into the formation.

The above two factors generally do not cause slippage, but when the operator's level of operation is not proficient or the formation conditions are not well understood, the probability of this phenomenon will greatly increase. As the pile drilling machine performs continuous cutting under normal conditions in the hole construction, the uneven structure is left at the end of the previous cutting, leaving an entry point for the next cutting. If the operator's operating experience is insufficient, the cutting point is covered with excess slag or is flattened, which will cause the next drilling tooth to fail to cut in smoothly, affecting the torque output of the power head, and eventually the pressure cannot be transmitted to the bit, and the bit will idle at the bottom of the hole.

(2) Use certain operating skills to eliminate slippage. Raise the power head to the highest point, quickly reverse, sweep the virtual soil covered by the bottom of the hole, then pressurize first and then rotate. In this way, the moment when the inner and outer keys of the drill pipe are in contact, the pressure is transmitted to the bottom of the hole, and the drill teeth are cut into the formation. If it fails at one time, it can be repeated, but the single pressurization stroke should not exceed 1m, so as to avoid the fall of the rod and the damage of the drill rod.

(3) Increase the length and angle of the teeth of the pile drill bit, so that the teeth are better cut into the formation. However, this method takes a lot of time and is generally not recommended.

When using a friction rod driller to drill hard mud and soil formations, the operator should pay special attention to the following two points:

(1) Control the amount of single footage to avoid excessive single footage, which will cause the drilling to emerge from the top of the bucket and cover the hard formation cut-in point.

(2) When lifting the hole at the bottom of the hole to close the bucket door, avoid reversing as many times as possible, so as not to grind the cutting point of the teeth.

For easy-slip formations, as long as the operator can do both of the above well, drilling can be guaranteed to proceed normally in most cases.