When using a rotary drilling rig in a karst cave area, construction is often faced with the risk of sudden drilling accidents (collapsed holes, slurry leakage, buried drilling, stuck drilling, etc.). When the accident occurs, it often costs a lot of manpower, material resources and Financial resources for subsequent processing will seriously affect the economic benefits of the construction party. 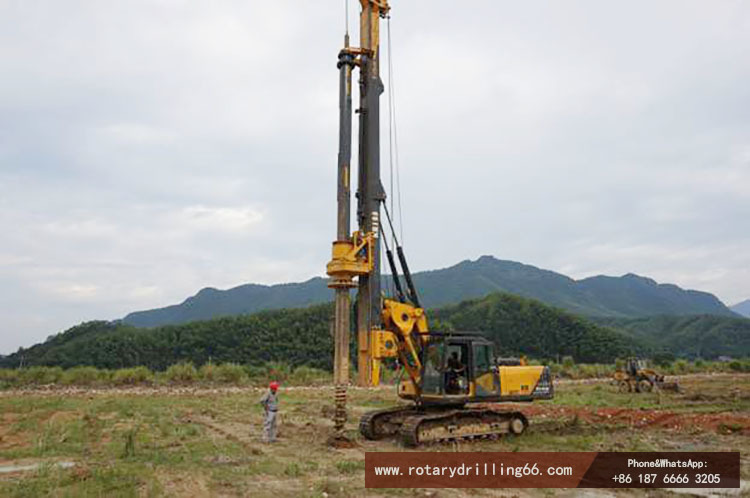 The main reason for the formation of slurry leakage and hole collapse here is that there is no filling material in the cave inside the area. As soon as the rotary drilling rig drill penetrates the roof of the cave, Dazu mud will leak into the cave space, causing the liquid level in the hole to drop sharply. The pressure of the liquid column generated by the mud in the hole also decreases. When the mud pressure in the hole is not enough to maintain the stability of the hole wall, a hole collapse accident is caused.

This method is generally suitable for small karst caves with a height less than lm. The specific method is: when the drill bit penetrates the roof of the cave, the drill bit is lifted out of the hole at the same time, and then a piece of stone and clay block is put into the hole first, and the drill is pressed repeatedly to make it compact. When the thickness of the backfill exceeds lm measured with a measuring rope, the karst cave area can be placed in a drill bit to continue drilling after the wall protection condition is formed.

This method is generally used for karst caves with a height of 1-3m. Due to the high height of the cave, it is difficult to obtain good wall protection conditions only by throwing back the filling method. Therefore, the concrete filling method needs to be adopted. The specific method is as follows: first throw the filling (crushed) stone, sand mixture and low-grade The cement slurry is squeezed repeatedly to block the gap of the chip mortar in the cement mortar. After the drilling is stopped for 24 hours, the strength of the cement reaches 2.5 MPa, and then the drilling is continued to pass through the cave.

Generally used for karst caves with a height greater than 3m. The specific construction method is as follows: First, the rotary drilling rig is drilled into a hole to a certain height from the top plate of the karst cave, and then the vibratory hammer is used to vibrate the steel cylinder to the drilling position, continue drilling, pass through the karst cave, and timely The steel protective tube sinks to the bottom of the cave.

The above three solutions can not only prevent the occurrence of slurry leakage and cave-in in the cave formation, stuck drilling and buried drilling accidents, but also prevent the drilling from tilting: the first two methods can better improve the drill bit encountered when it comes into contact with the bottom floor of the cave. In the case of uneven hard and soft formations, the steel casing method can be used to limit the drill bit, and supplemented with appropriate operating methods to avoid hole slanting.

(1) Before construction, consult the geological report in detail, and have a full understanding of the development status, location distribution, and filling situation of the karst cave.

(2) Select the appropriate construction method according to the nature of the cave, so that the best cave treatment effect can be achieved.

(3) During the construction process, pay close attention to the liquid level of the mud in the borehole. When the height suddenly drops, the drill bit should be lifted out of the hole in time and find the cause to avoid the collapse of the borehole wall caused by the low pressure in the borehole. The accident happened.

(4) Prepare a large amount of clay, flakes and a certain amount of bagged cement near the hole. At the same time, arrange two large mud pools on the site. If there is leakage of slurry in the hole, refill and backfill in time.

(5) The rig operator should adjust his mentality. When drilling through the cave and touching the bottom plate of the cave, do not pressurize blindly to avoid causing the hole to be inclined.